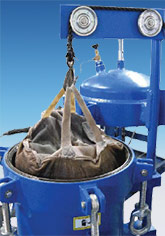 Varnish is the thin, insoluble film deposit that forms on oil-wetted surfaces inside a turbine lube system, including bearings and servo valves. It's formation is often attributed to higher operating temperatures, smaller fluid reservoirs, high cyclic service, and fluid base stocks that have lower solvency for varnish precursors.

You can't see it, but you know it's there taking your hydraulics system down one component at a time.

When varnish forms in turbine oils, the effects can be devastating to the operation and availability of the equipment, and may include: The demand for reliability, availability, and seamless operation of today's power turbines requires an efficient, easy, and reliable method for removing varnish not only from the oil, but also from the wetted metal surfaces inside the machine.

The Pall Sentry™ resin-based system is designed to efficiently remove varnish precursors from the oil. Doing this forces varnish deposits on metal surfaces back into the solution for further removal by the Sentry treatment skid. Treatment continues while the turbine operates, until the entire oil system is free of varnish, as shown by consistently low MPC value in the oil.

Other filtration/adsorption or electrostatic removal methods are very dependent on operating conditions such as operating temperature, cycling rates, and the chemical make-up of the oil.

The Pall Sentry resin-based varnish removal skid can remove varnish precursors with greater reliability and efficiency because it is largely temperature independent and does not rely on mechanical interception of the varnish precursors.

The stand-alone system uses a specially formulated resin in a semi-dry package. The skid uses three resin bags stacked in the vessel, which can easily be changed and disposed of as varnish is removed.

The Pall Sentry fluid treatment system is connected to the main lube or control oil reservoir and circulates the fluid at a rate of 3 gpm (11.35 l /m) through the resin and a high-efficiency Pall Ultipleat® SRT particulate removal filter, the latest generation in machine lube protection. With each pass through the system, varnish precursors are removed and the fluid is returned to the reservoir. Once used, the resin bags can be easily replaced and disposed of.

1 All dimensions are nominal.

Before we get started with your quote, let us know your goods destination country so we can expedite the process.